This symposium series started in the 2015 academic year as part of the activities of the Kobe University and Beijing Foreign Studies University International Collaborative Research Base. This year’s symposium was held under the theme of “China, Japan and East Asia 1989-2019: Inside and Outside the Heisei Era”.

On July 7, opening speeches from Professor Masahiko Yoshii (Executive Vice President in Charge of International Exchange) and Professor Jinwen Song were followed by reports from researchers. Moderated by Professor Daisuke Higuchi (Graduate School of Humanities), six members of Kobe University and four members of Beijing Foreign Studies University presented research from their specialist fields in humanities and social sciences including literature, history, art, economics and politics. They delivered multifaceted arguments from the perspective of China, Japan and East Asia on the period from 1989 to 2019, defined as the Heisei era in Japan. In the final plenary discussion chaired by Professor Higuchi the debate deepened further to encompass future developments in these fields.

Next year’s symposium will take place at Beijing Foreign Studies University. Through this symposium we look forward to further deepening the academic exchange between our institutions, and developing partnerships with other institutions in China, Asia and worldwide. 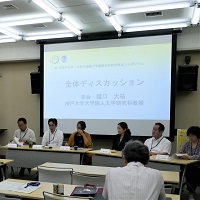