Interview with EU Ambassador to the Republic of Korea

His Excellency Dr. Michael Reiterer, EU Ambassador to the Republic of Korea, visited Kobe University on July 11. He first gave a lecture titled “The European Union: A Partner in Comprehensive Approaches to New Security Challenges” and then had an interview with several Kobe University students.

As many people are not familiar with the concept of the EU embassy, we started by asking Ambassador Reiterer to introduce the EU embassy and its roles.

For the example of trade policy, Ambassador Reiterer commented: “You can’t negotiate free trade agreements with Germany or Finland or Spain. You can only negotiate it with EU officials. And if there’s a trade policy issue, the EU delegation will take care of it.”

He first mentioned that nowadays we still think that the “other” is not good because they are different from us, and this way of thinking is very dangerous because it may create many conflicts. Studying abroad will broaden your vision and change your thoughts.

“You will see that you are not different because you are from different nationalities. If you work together, if you talk together you will maybe find yourselves making friends because you like each other,” he said.

Ambassador Reiterer encouraged us to learn about other cultures, listen to others and not believe in stereotypes. “The experience of studying abroad will surely give you new perspectives and will help you understand the “other” much better.”

One student mentioned that she’s going to study abroad in Switzerland. Since the ambassador spent some years in Switzerland, we asked him first about his job in Switzerland then added a question about why Switzerland is not yet a part of the EU.

The ambassador explained that he studied in Geneva, became an Austrian diplomatic in Geneva too, and after that he was the EU ambassador to Switzerland for 5 years.

As for the fact that Switzerland is not yet part of the EU, he stated that this is mainly because Switzerland has a direct democracy system. “Direct democracy is good if you practice it all the time and that’s what the Swiss are doing. The system is interesting and the Swiss fear that if they will join the EU they have to change that system.”

He also added that they have already assured Switzerland that they could maintain their system but they have to make some adaptations to it. That’s the major point of tension now between the EU and Switzerland.

The next question was about peace. The EU was mainly created to achieve peace and won the Nobel Peace Prizce in 2012.

We asked: “Is the EU now taking measures to achieve world peace? Do you think there's an effective way to resolve conflict in the world and build lasting peace?”

Ambassador Reiterer said first that getting the Nobel Peace Prize was a great achievement and the EU has brought many Central and Eastern European countries peacefully into the European Union.

Then he told us about trying to create sustainable peace by creating the infrastructure:

“There are hot spots to intervene to help militarily if necessary for peace-making or peace-keeping, and so-called civilian interventions are taken in countries after wars, conflicts, and civil wars. When there is just not enough civil infrastructure, the civilian mission brings judges, policemen, prison wardens. Managers for various positions are brought to the country to help manage, but more importantly to train the local people at the same time.”

He gave the operation in Somalia as an example: “If you only have a police operation, putting pirates in prison, you don’t solve the problem. You have to help to develop Somalia so that they don’t become pirates.”

“The same applies to most of these problem spots where there is a root cause. Whenever possible, the philosophy of the European Union is to go to the root cause. Not just have police action. That’s the ideal, but of course it doesn’t work all the time.”

In the last part of this interview, Ambassador Reiterer told us how we university students can spend time outside studying and campus activities.

He talked about volunteering: “There are programs in which you have to engage in voluntary work for at least 3 weeks. Most of the work is somehow related to the environment, such as cleaning the woods and cleaning the beaches. The important thing is not only to clean, of course if you spend two hours at the beach clearing up plastic you will not save the world. But if you take action so that others see that there is somebody cleaning the beach, not leaving rubbish there, you set an example that others will follow. If you get into the minds of people, you might be able to change their habits.”

He added that you can of course choose what you are most interested in. “In all good activities you interact and then you also have to reflect. For example, when you read a book, first you have to understand what the book is about, the message, and then you can tell it to a friend, maybe a friend from another country. That’s a good thing.”

This article was written by Student PR Ambassadors Imen Jebri and Fumika Ito, and edited by a member of the International Affairs Planning Division.

Final comment from Student Ambassadors Imen and Fumika: “We learned a lot from this interview, and we really appreciated the opportunity to speak with Ambassador Reiterer.” 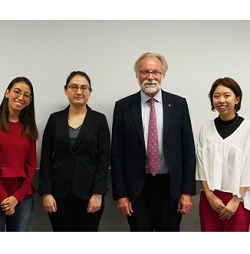