Visit from the Delegation of the European Union to Japan

Kobe University was honored to receive a visit from a representative of the Delegation of the European Union to Japan (EEAS). First Secretary Gabriele Lo Monaco, of EEAS’s Trade Section, was welcomed by Professor Masahiko Yoshii (Executive Vice President in Charge of International Exchange) on September 25th. Their meeting was also attended by Professor Noriyuki Inoue (of the Graduate School of Law) and Associate Professor Agata Wierzbowska (of the Graduate School of Economics).

First of all, the members introduced their specializations and research areas. Subsequently, the discussion moved on to developments regarding the Japan-EU Economic Partnership Agreement (EPA) and the Japan-EU Strategic Partnership Agreement (SPA). They also exchanged opinions on a wide range of issues; including the possible effects of Brexit, the EU’s initiatives to resolve various social issues in Europe and the impact of these initiatives on the policies of countries outside the EU. The discussion was lively; they were able to examine the issues from various perspectives- from Japanese and European viewpoints, as well as from economic and legal academic standpoints. Both EEAS and Kobe University agreed that they would like to collaborate on lectures and discussion seminars at Kobe University if the opportunity arises.

In 2015, Kobe University was selected as the location for the only Jean Monnet Centre of Excellence in Japan. The Jean Monnet Centre of Excellence is named after the French economist Jean Monnet, who is known as the father of the European Union. Through this program, Kobe University carried out education and academic research relating to the EU for a period of three years from September 2015. Providing assistance in establishing EU-focused academic centers is just one part of the Jean Monnet Program. In addition, the Jean Monnet Chair project aims to boost EU knowledge in higher educational institutions. Kobe University’s Executive Vice President Yoshii (2015-2018) and Professor Inoue (2019-2022) were selected for this teaching position and have been striving to increase EU awareness in Japan.

Kobe University also aims to build upon its valuable relationship with EEAS, in addition to furthering Japan-EU education and research cooperation. 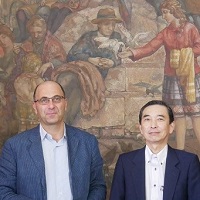