Visit from the Embassy of the Republic of Poland in Japan

President Takeda gave a welcoming address and outlined Kobe University’s academic collaborations with Eastern European Universities, in particular those facilitated though Kobe University’s Brussels Center and Liaison Office in Kraków. Mr. Tyszkiewicz expressed hopes of strengthening inter-university exchanges between Poland and Japan. Both President Takeda and Mr. Tyszkiewicz agreed that they would both like to boost mutual student exchange between the two countries.

Mr. Tyszkiewicz was also in attendance when President Takeda presented a letter of gratitude to the non-profit organization Nippo Salon (which facilitates cultural exchange between Japan and Poland). Afterwards, the Acting Deputy Chief of Missions visited the Graduate School of Intercultural Studies and met with the Graduate School Dean, Professor Takuya Nishitani, and the Faculty Dean, Professor Tetsu Sakurai. They held a special lecture on ‘Poland and Japan’ that attracted general audiences, as well as Kobe University’s students and faculty.

This year marks 100 years since the establishment of diplomatic relations between Poland and Japan. Hopefully this will provide good opportunities to bolster exchange between the two countries. Kobe University has already been building fruitful partnerships with Polish universities and hopes to further strengthen these collaborations. 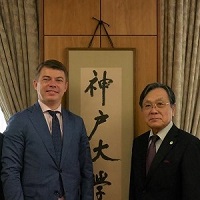