Kobe University held a two-day German-Japanese Symposium with the theme of ‘Transition – A Paradigm of World Society in the 21st Century’ on October 16 and 17 in collaboration with Trier University. Located in the central western region of Germany, Trier University was originally established in 1473. Kobe and Trier signed an academic cooperation agreement in June 2005 and have been exchanging students and engaging in humanities and social studies research collaborations since then. This joint symposium was funded by DFG (the German Research Foundation) to allow German and Japanese researchers to share results with the aim of facilitating new international research collaborations.

The two days featured four sessions focusing on economics, international relations, literature and philosophy respectively. These allowed academics from both countries to present the latest results in these fields. Attendees were treated to impassioned presentations which culminated in informative question and answer sessions and lively discussions.

This symposium allowed both universities confirm each other’s intentions regarding the continuation and expansion of these mutual academic and research exchanges. Kobe University hopes to further develop this close partnership with Trier University. 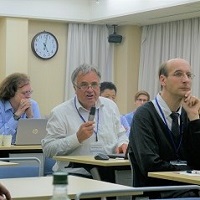