Visit from Peking and Fudan universities

Fudan University was originally established in 1905. It is a comprehensive university which currently has 17 graduate schools. There has been active student and researcher exchange between Fudan University and Kobe University since the signing of an academic cooperation agreement in January 1992.

In addition, the three universities (Kobe, Fudan and Peking) have been holding an annual academic forum focusing on the humanities. This year’s forum marked Kobe University’s Graduate School of Humanities’ 70th anniversary, and focused on the collaboration between the three institutions. It took place at Kobe University on November 8 and 9.

This pre-forum meeting on November 7 was an opportunity to discuss future collaborations. Fudan’s Professor Chen began the conversation by mentioning that this year marks 40 years of faculty exchange between our universities. Over this period, 12 academics from Fudan were dispatched to Kobe University. Professor Chen also expressed his hopes that Fudan could hold next year’s forum and stated that he wished to further develop academic exchange between his institution and Kobe University.

Next, Peking University’s Professor Zhang also talked about the successful faculty exchanges that had been achieved over the years and hoped that such mutual exchanges of talented academics between Peking and Kobe universities could continue.

Executive Vice President Yoshii stated that Kobe University has developed strong relationships with universities in China and welcomes many Chinese exchange students. He went on to say that Kobe has a particularly long history of exchange with Peking and Fudan and hoped that these highly beneficial collaborations could continue. The lively conversation moved on to academic discussion of the humanities, and the universities agreed to deepen their exchanges.

Using our fruitful collaboration in the humanities as a base, Kobe University hopes to strengthen its beneficial academic relationships with both institutions. 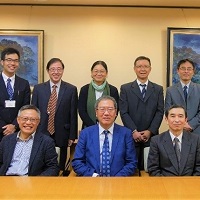