Rule of Law, Democracy and Constitutionalism workshop held in Brussels

A workshop was held at the Kobe University Brussels European Centre (KUBEC) on the theme of “The rule of Law, Democracy and Constitutionalism: Dialogue between Japan and Europe” on October 31 and November 1. The year 2019 is of historical significance for both Japan and Europe. In Japan, a new emperor succeeded the throne. In Europe, this year marks the 30th anniversary of the Fall of the Berlin Wall and of the first free election in Poland, in addition to the anniversaries of other notable events. However, Constitutionalism in Japan and Europe, including the principles of the rule of law and democracy, has begun to waver in recent years. The proposed amendment of the Constitution has become one of the most important political issues in Japan. Europe has witnessed a surge of populism due to the refugee and migrant crisis, and the number of representatives belonging to anti-EU parties has increased. Against such a background, this workshop aimed to reconsider the normative contents of the fundamental principles of Constitutionalism- including the rule of law, democracy and the guarantee of basic human rights.

Attendees from Japan included Kobe University’s Executive Vice President Masahiko Yoshii (in charge of International Exchange and Evaluation) and Professor Noriyuki Inoue (of the Graduate School of Law), in addition to researchers from Hiroshima, Shitennouji, Meijo and Toho universities. Researchers European countries, including Germany, Austria, Poland and Italy, also attended the workshop. The Japanese participants raised issues faced by Japan, comparing them to those faced by Europe. Presentations concerning problems in each country, including those pertaining to EU Laws, were given by the European attendees. All of the participants discussed efforts to resolve these issues.

This workshop presented a good opportunity to recognise the issues faced by different countries and to deepen mutual understanding. It is expected that further collaborations with European researchers will develop as a result of this workshop. 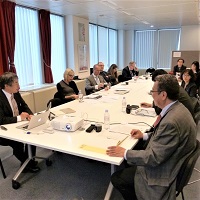