A delegation led by Pro-Rector Nu Nu Yi of Dagon University, Myanmar was welcomed to Kobe University by Vice President MASUMOTO Hiroko (in charge of International Education and International Collaboration) on December 16. The meeting was attended by Dagon University’s Head of the Department of Law, Prof. Dr. Daw Mi Khin Saw Aung, and Prof. Dr. Daw Than Nwe, an executive committee member of the Myanmar Academy of Arts and Science. Director KIMURA Kan (of the Center for Asian Academic Collaboration) and Professor KANEKO Yuka (of the Graduate School of International Cooperation Studies) from Kobe University were also present.

Dagon University was established in 1993 and is one of the largest national universities in Myanmar. Its campus is located in Myanmar’s largest city of Yangon and has 20 faculties with around 23,000 regular students. Exchange is currently being developed between individual researchers at Dagon and Kobe universities; for instance Professor Kaneko has been carrying out joint comparative law research with Prof. Dr. Daw Mi Khin Saw Aung.

The meeting began with Professor Masumoto extending a warm welcome to the visitors. Pro-Rector Nu Nu Yi then gave an overview of Dagon University and explained about their current academic exchanges with universities in Japan. Both parties confirmed that they are successfully developing academic exchange in Law centered on Kobe University’s Graduate School of International Cooperation Studies and Graduate School of Law. They had a detailed discussion regarding the possibility of expanding academic exchange with plans to continue these talks further.

It is hoped that this visit will result in active exchange between the two universities in the future. 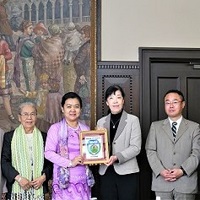