President TAKEDA Hiroshi visited Shanghai, China from December 5 to 8. He was accompanied by Vice President MASUMOTO Hiroko (in charge of International Education and International Collaboration), Vice Director HUANG Lin (of the Center for Asian Academic Collaboration, and professor of the Graduate School of Economics) and members of the International Affairs Division. The purpose of this visit was to attend the ‘Kobe University- Shanghai Jiao Tong University Joint Forum (KUAREF series)’and ‘The second “Innovation X Cooperation” Japan-China Enterprise Innovation Cooperation Forum’, which were organized as part of a collaboration between two universities and the Consulate-General of Japan in Shanghai. They also attended a gathering of the Kobe University Alumni Association in China (Shanghai/East China chapter).

In the afternoon of December 5, the Kobe University delegation met with Professor JIANG Sixian (Chairman of Shanghai Jiao Tong University Council) to discuss current exchange. President Takeda outlined Kobe University’s vision and expressed hopes that cooperation in the fields of medicine and natural sciences would be deepened. Professor Jiang stated that he would also like to enhance collaboration in these fields, particularly with regard to the healthcare industry and marine science. Afterwards, the visitors from Kobe University were given a tour by Professor JI Weidong (Director of the Center for Japanese Studies). They visited the ‘Kobe University and Shanghai Jiao Tong University Interdisciplinary Research Base’, which was established in June 2018.

The ‘Kobe University- Shanghai Jiao Tong University Joint Forum (KUAREF series)’and ‘The second “Innovation X Cooperation” Japan-China Enterprise Innovation Cooperation Forum’ were held on the following day. Opening addresses were given by President Takeda, Vice President XU Xuemin (of Jiao Tong University) and Consul-General ISOMATA Akio. The theme of this year’s forum was ‘Healthcare Industry and Social System Innovation in Ageing Societies’. Five highly specialized speakers from both China and Japan gave keynote lectures based around this theme from industrial, governmental and academic perspectives. Professor KOWA Hisatomo of the Graduate School of Health Sciences at Kobe University gave a lecture about the development and implications of his dementia prevention project.

This was followed by a productive panel discussion in which discussants from both Shanghai side and Kobe side exchanged opinions on how China and Japan could work together to tackle the issues faced by ageing societies. The closing remarks were given by Consul FUKUDA Takamoto and Director Ji Weidong.

The panelists from Kobe were:

SEKINE Yuki, Director of the Center for International Education, and Professor of the Graduate School of Law, Kobe University

It is hoped that this visit will strengthen cooperation between Shanghai Jiao Tong University and Kobe University, and contribute to enhancing cordial relations between China and Japan. 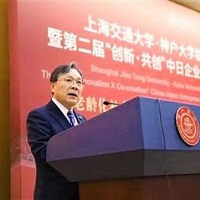