The 16th Annual German-Japanese Colloquium was held at the Hamburg University of Technology on December 9 and 10, 2019. This event has been organized once a year since 2004 by the Japan Society for the Promotion of Science’s Bonn Office (JSPS-Bonn) in collaboration with universities from both Germany and Japan. For 2019’s colloquium, the Hamburg University of Technology (TUHH) and Kobe University presented a program based on mutual research. The program’s three sessions were entitled “Bubbly dynamics for process engineering”, “Materials for process engineering” and “Materials for electric devices”.

The opening addresses were given by Professor Michael Schlüter of the Hamburg University of Technology and Professor TOMIYAMA Akio of Kobe University’s Graduate School of Engineering. Subsequently, the Consul General of Japan in Hamburg, KATO Kikuko and TUHH’s Vice President Andreas Timm-Giel gave acknowledgements.

In addition to professors from Kobe University and TUHH, researchers from many other German and Japanese institutions gave lectures during the two-day event; including those from Technische Universität Darmstadt, Helmut Schmidt University, Helmholtz-Zentrum Geesthacht, Osaka University and Tottori University. These resulted in deep discussions on various significant engineering developments in energy transfer processes and materials.

The colloquium also offered the opportunity to discuss further student exchange as well as tour the Hamburg University of Technology’s campus. In addition, JSPS-Bonn gave an overview of the current status of their many programs for university-level exchange between Germany and Japan. The event concluded with a closing address from the director of JSPS-Bonn, Professor HAYASHI Masahiko, in which he gave thanks to those who helped organize the event and expressed his hopes for further collaborations and scientific developments between Germany and Japan.


Links :
-Program of the 16th Annual German-Japanese Colloquium
-JSPS-Bonn (in German)
-Press release from TUHH (in German)
-Institute of Multiphase Flows of TUHH 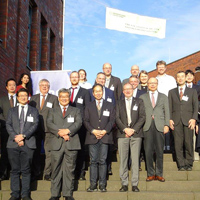