Fourth symposium held by the Honolulu Office of Kobe University

On February 4, “The 4th HOKU Symposium for Advanced Interdisciplinary Research Collaboration between Kobe University and University of Hawai’i” took place at the Hawaii Imin International Conference Center in Honolulu, Hawaii.

The symposium was chaired by Professor SHIRAI Yasuhito, Deputy Director of Kobe University’s Office of the Americas, and opening remarks were given by the director of the office, Professor YAMAMOTO Hideyuki. The morning session was conducted on the theme of "History and Literature of Japanese Americans in Hawaii", with presentations on literature, culture and history from researchers of Kobe University, Nihon University and the University of Hawaii. An academic from the University of Hawaii acted as commentator, and a lively opinion exchange and question and answer session ensued.

The afternoon session’s theme was "Economics for Sustainable Society in Hawaii and Japan". Professor Denise Konan, Dean of the College of Social Sciences at the University of Hawaii at Manoa, gave a keynote speech on solar power in Hawaii. This was followed by Kobe University and University of Hawaii academics giving presentations and exchanging opinions on the current worldwide topic of ‘Sustainable Society’ from an economics standpoint.

Closing remarks were given by Dean Konan, in which she expressed how thankful she was that the fourth HOKU symposium could be held. She also expressed her hopes that the cooperative relationship between the University of Hawaii and Kobe University, which has existed for nearly 30 years, would be further developed. As the symposium came to an end, attendees were able to share valuable academic insights while discussing possible future academic collaborations.


Prior to the symposium, Director Yamamoto, Deputy Director Shirai and Professor KINUGASA Tomoko (Graduate School of Economics) visited JAIMS (Japan-America Institute of Management Science) on February 3 to discuss details regarding the upcoming collaboration. They also visited the University of Hawaii at Manoa to talk to Dean Konan and the international office staff about how to strengthen future academic cooperation. This resulted in a concrete discussion regarding researcher and short-term student exchanges.


Kobe University will continue to promote cooperation and exchange with American and Pacific institutions by holding positive joint academic events like the HOKU symposium. 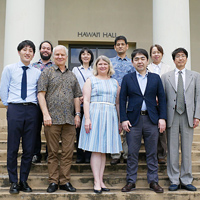