Kobe University was selected for the Visegrad Grants in 2020, and has consequently been offering a new course since last October on social structure and global society post-Corona. This involves comparing aspects of Japan with those of countries in Central and Eastern Europe, which have experienced systemic changes and are dealing with globalization. The course is run in cooperation with researchers from the following partner universities in the V4 countries: Jagiellonian University (Poland), Eötvös Loránd University (Hungary), Comenius University (Slovakia), and Charles University (Czech Republic).

This conference was held to conclude the project, and was attended by Professor Emeritus YUI Kiyomitsu and Professor SHIRATORI Yoshihiko from the Graduate School of Humanities, participating researchers from each V4 partner university, and students who had taken the course. In the first session, Professor Emeritus Yui reviewed the main points of the classes given so far, which was followed by a lively discussion among the researchers. The students who witnessed this high level discussion said that it was very stimulating. In the second session, the participants discussed the possibility of applying for a new project or another research grant to further develop the academic exchange conducted up until now, and also traded opinions on the possibility of producing a publication as an outcome of this project. These discussions will be continued so that concrete plans for further collaboration can be made.

Kobe University was also selected to receive the Visegrad Grants in 2017 and has subsequently been actively engaged in international exchange activities, including the implementation of other projects, with partner universities in Central and Eastern Europe. We will continue to promote stronger cooperation in education and research between Japan and these countries. 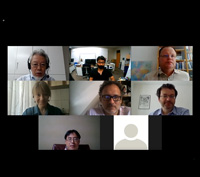