“The 1st KULOS Symposium for Development of the Academic Relationship between UW and KU: Past, Present and Future" was held on online on Thursday, March 3 and Friday, March 4, 2022 (PST). This was the first event held by KULOS (Kobe University Liaison Office in Seattle), which was established in April 2020 as our first liaison office located on the US mainland.

On both days, sessions were followed by a panel discussion that fostered a lively exchange of questions, answers and opinions. The panel discussion on the second day saw wide ranging discussions on how the University of Washington and Kobe University can strengthen their partnership and there was talk of holding regular meetings in the future to facilitate exchange of young researchers as well.

The closing remarks on the second day were given by Professor Shirai. He thanked everyone who participated in and helped organize the inaugural symposium for the Seattle Office, and expressed his hopes that collaborative events like this can be held in the near future with many universities from all over the world.

The symposium succeeded in giving the participants a meaningful opportunity to share their thoughts and ideas and will contribute towards further developing the relationship between the University of Washington and Kobe University.

Kobe University will continue to hold academic events with American institutions and strengthen its exchanges and collaborations in the region. 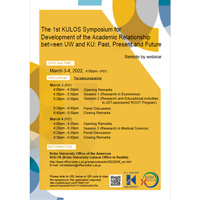