An opening ceremony for the Kobe University Liaison Office in Seattle (KULOS) was held in Seattle, followed by the 2nd KULOS symposium on the next day. Located in the Hyogo Business & Cultural Center In Washington (HBCC), KULOS is Kobe University’s new North American office, established thanks to the cooperation of Hyogo Prefecture and the Hyogo International Association.

Even though KULOS was set up on April 1, 2020, the opening ceremony was postponed due to the coronavirus pandemic. The ceremony was finally held on October 31, 2022 at Safco Plaza, where HBCC is located. Attendees at this celebratory event included HBCC Director KOBAYASHI Junko, Kobe University Executive Vice President NAKAMURA Tamotsu, Director SHIRAI Yasuhito (of the American Division of the Institute for Promoting International Partnerships), Director KAWAI Naruo (of the Global Education Center), Project Professor KAWAI Hiroshi (Research Center for Inland Seas, Kobe University) and Director IMURA Takashi (of the International Division).

The 2nd KULOS Symposium “Ocean Research and its Application for a Sustainable Society” was held at the Graduate Hotel Seattle on November 1. The symposium was preceded by a networking lunch, which was attended by over 50 people, including the Consul General of Japan in Seattle INAGAKI Hisao, Kobe City Mayor HISAMOTO Kizo, a business mission group from Kobe City, University of Washington officials, and local Japanese business people.

The symposium was chaired by Director Shirai, with opening remarks from Executive Vice President Nakamura and Professor Mari Ostendorf (Vice Provost for Research, University of Washington), followed by a presentation on "Ocean Research and its Applications in a Sustainable Society" given by 4 speakers. Dr. Christopher Bassett (Applied Physics Laboratory at the University of Washington) presented an overview of marine energy resources and the development of technologies to utilize them, and Project Professor Kawai Hiroshi gave a presentation on the benefits of using offshore wind power generation facilities to cultivate seaweed and seagrass for blue carbon purposes. Mr. Simon Geerlofs (Washington Maritime Blue) then explained the efforts and goals of the non-profit organization Washington Maritime Blue. This was followed by Ms. Rachel Aronson (Program Director of Washington Maritime Blue) giving a presentation on the Quiet Sound program, which aims to reduce the acoustic impact of large commercial vessels on the declining number of killer whales in Washington state waters. The symposium provided a good opportunity for participants to consider the theme of the symposium, "Ocean Research and its Application in a Sustainable Society," from various perspectives.

In his closing remarks, Executive Vice President Nakamura Tamotsu expressed his gratitude to the varied people and institutions that participated, including the Mayor of Kobe, Kobe City officials, companies in the U.S., the University of Washington, and Seattle research institutions. He stated that this wide-ranging involvement was what made the symposium a success on the 65th anniversary of the sister city relationship between Kobe and Seattle. He also emphasized that Kobe University will use the Seattle base as a foothold to build strong partnerships with the University of Washington and other U.S. educational and research institutions, playing an important role in addressing universal issues in an increasingly globalized world. 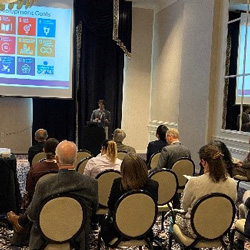