The 12th Kobe University Brussels European Centre Symposium, entitled “Blue Economy, Green Horizons: EU-Japan Research for Healthy, Sustainable Seas and Oceans”, took place at the Vrije Universiteit Brussel (VUB) in Belgium on October 18, 2022. This symposium is an annual event jointly organized with VUB, with recent support from the University of Kent (UK) in the last two years. The 12th itineration was held in person in Brussels for the first time in three years. Over 130 people attended, including those in government-related positions in the EU and Japan, researchers, students, journalists and business people.

The event was chaired by YOSHIDA Ken-ichi, director of Kobe University Brussels European Centre (KUBEC) and director of the Institute for Promoting International Partnerships’ Europe & Africa Division. The opening addresses were given by Kobe University’s President FUJISAWA Masato, VUB Rector Jan Danckaert, H.E. MASAKI Yasushi (ambassador of Japan to the European Union) and Signe Ratso, acting director-general of the European Commission’s DG for Research and Innovation. They expressed their hopes that the extensive themes and research topics relating to the ocean will provide opportunities for further Japan-EU cooperation.

In addition, the event featured two keynote speeches given by French screenwriter and filmmaker Michael Pitiot and the former DG of the WTO, Pascal Lamy, respectively. Mr. Pitiot used a variety of images and footage to show ocean environments around the world. He also explained the important roles and methods by which media can help regular audiences engage with environmental issues and science. As the board chair for one of Horizon Europe’s 5 missions (Mission Starfish: Restoring our Oceans and Waters by 2030), Mr. Lamy gave a broad overview of the necessity of global cooperation for protecting ocean environments (Horizon Europe is the EU’s research funding programme).

The morning of the event was divided into the following three parallel breakout sessions: 1. ‘Blue economy’: Global Trade Flows, Environmental Issues and Governance of the Seas., 2. Oceans of the Future: Advances in Marine and Maritime Sciences: New technologies for New Horizons., and 3. Seas, Science and Societies:  Building Awareness, Engaging Communities. These sessions provided a platform for the latest research results, activities and policy initiatives to be presented, as well as fostering future collaborations. To delve deeper into these topics, workshops corresponding to each session were held in the afternoon, giving all participants the opportunity to actively exchange opinions and engage in question-and-answer sessions. It is hoped that these activities will result in the development of joint research projects and exchanges between different organizations.

The symposium concluded with closing addresses from Executive Vice President NAKAMURA Tamotsu, Jeremy Carette (the University of Kent’s Dean for Europe), and VUB Vice Rector Hugo Thienpont. They expressed their appreciation to all who took part in making the symposium a success, emphasized the importance of international exchange and their hopes for the revitalization of the extensive exchange of researchers and students between Japan and Europe.

Since it was established by Kobe University in 2010, KUBEC has served as an education and research hub in Europe. It holds various academic events (such as this symposium series) and promotes joint research and academic exchange agreements, thus enhancing Kobe University’s presence in Europe. This symposium was held in person for the first time in 3 years, bringing home the importance of in-person conversation for building valuable connections between people.

Spearheaded by the evolving Institute for Promoting International Partnerships, Kobe University will continue leverage its Brussels Office to promote stronger Japan-Europe collaborations in both education and research. 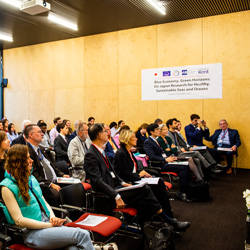